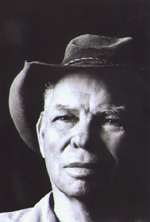 Gender: Male
Heritage: Aboriginal ; Aboriginal Guwamu / Kooma
(Storyteller) assertion
The material on this page is available to AustLit subscribers. If you are a subscriber or are from a subscribing organisation, please log in to gain full access. To explore options for subscribing to this unique teaching, research, and publishing resource for Australian culture and storytelling, please contact us or find out more.

Herb Wharton was born in Yumba, an Aboriginal camp in the south-western Queensland town of Cunnamulla, one of eleven children. His maternal grandmother was Kooma, and both grandfathers were Irish. Before Wharton started writing, he worked as a stockman, a drover and a labourer. He took up writing late in life, at around the age of 50 and, with a grant from the Aboriginal and Torres Strait Islander Arts Board (ATSIAB) of the Australia Council, bought an electric typewriter and began writing poems, some of which were published in various journals.

In 1990, he entered some of his poems for the David Unaipon Award. These were highly commended and the University of Queensland Press then commissioned him to write a novel. His writing career began to flourish after the publication of this first novel, Unbranded (1992), based on his experiences as a stockman in the Australian outback. Since then, he has published several collections of short stories and poetry, and a young adult novel.

A full-time poet and fiction writer, and a recognised story teller, Wharton has also been a prominent speaker at national and international literary festivals and a lecturer in Australian Indigenous literature, and he has travelled extensively throughout Australia and abroad.

More recently, he was involved with Ringbalin: River Stories, a documentary film mapping Indigenous stories of the Murray Darling Rivers (2013).

In 2020, Herb Wharton was the recipient of both an Order of Australia (AM) for signficant service to the literary arts, to poetry, and to the Indigenous community, and a Johnno Award for for outstanding services to writers and writing in Queensland.