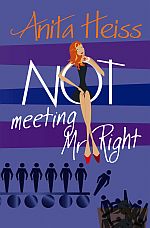 Not Meeting Mr Right single work   novel   humour
The material on this page is available to AustLit subscribers. If you are a subscriber or are from a subscribing organisation, please log in to gain full access. To explore options for subscribing to this unique teaching, research, and publishing resource for Australian culture and storytelling, please contact us or find out more.

'Alice Aigner is successful, independent and a confirmed serial dater - but at her ten-year school reunion she has a sudden change of heart. Bored rigid by her married, mortgaged and motherly former classmates, Alice decides to prove that a woman can have it all: a man, marriage, career, kids and a mind of her own.

'She sets herself a goal: meet the perfect man and marry him before her thirtieth birthday, just under two years away. Together with her best friends Dannie, Liza and Peta, Alice draws up a ten-point plan. Then, with a little help from her mum, her dad, her brothers, her colleagues and her neighbour across the hall, she sets out to find Mr Right. Unfortunately for Alice, it's not quite as easy as she imagines.

'Who could not fall in love with our Koori heroine as she dates (among others): Renan, whose career goal is to be the world's best moonwalker and male hula dancer; Tufu the commitment-phobic Samoan football player; scary Simon the one-night stand; and Paul - Mr Dreamboat, but perhaps too good to be true. All the while, Alice skilfully avoids dating Cliff, son of her mum's friend, a confirmed bachelor who isn't likely to settle down with a woman anytime soon.' (Publisher's blurb)

VIEW PUBLICATION DETAILS FOR ALL VERSIONS ()

'Peta Tully has found her Mr Right. The only trouble is, she's not sure she's ready to settle down. Not just yet, anyway - so when she's offered a twelve-month contract interstate which just might win her the job of her dreams, she puts her Sydney life on hold, packs her bags and jumps on a plane, leaving her doting boyfriend behind.

'Peta takes a voluntary vow of celibacy, but sticking to it proves harder than she imagines.' (Publisher's blurb)

Works about this Work

' In this essay, I use a close reading of Anita Heiss’s five chick lit novels to argue that racial identity profoundly affects the relationship between the chick lit novel and advice manual genre. In Cosmopolitan Culture and Consumerism in Chick Lit, Caroline Smith contends that the chick lit novel critiques and satirizes regimes of female control through its engagement with the domestic advice manual. This relationship, however, does not always work in the way Smith assumes because the protagonist is not always white: she may be Latina, Chinese, South-East Asian, or, as Anita Heiss shows, Aboriginal Australian: Heiss’s fiction serves as an advice manual, designed to expose readers to the correct norms and behaviors for interacting with Australia’s First Peoples.'

“The Pretty and the Political Didn’t Seem to Blend Well” : Reconciling Competing Ideological Imperatives in Anita Heiss’ Chick Lit Imogen Mathew , 2015 single work criticism
— Appears in: JASAL , vol. 15 no. 3 2015; 'In recent decades, chick lit has become a ubiquitous – if not always celebrated – feature of the contemporary literary, social and cultural landscape. In Australia, Anita Heiss is one of the genre’s preeminent practitioners, and the only Aboriginal author writing chick lit for a mainstream, middleclass audience. A close reading of two of her novels (Not Meeting Mr Right and Manhattan Dreaming) reveals a deep political engagement running through her fiction. On the one hand, this political engagement is expressed by Heiss’ commitment to foregrounding the lives and experiences of young, urban, Aboriginal women. On the other hand, the narrative is peppered with references to, and discussion of, urgent political issues: from banning the burqa in France to protesting the Northern Territory intervention in Melbourne. While Heiss’ political engagement is of an unapologetically, left-wing, liberal cast, the analysis undertaken in this article will show that a surprisingly conservative bias forms the subtext to many of the political interventions in Heiss’ fiction. Galvanised by the question of why there should be such competing ideological imperatives at work in her fiction, this article will argue that the demands of an inherently conservative genre restrain and limit the extent to which chick lit can be used to promulgate a socially progressive vision.' (Publication abstract)
Je N’ai Pas (encore) Rencontré L’homme Idéal – Anita Heiss Mademoiselle Maeve , 2015 single work review
— Appears in: Mademoiselle Maeve 2015;
— Review of Not Meeting Mr Right Anita Heiss , 2007 single work novel
Respecting Protocols for Representing Aboriginal Cultures Jared Thomas /specialistDatasets/BlackWords , 2014 single work criticism
— Appears in: JASAL , vol. 14 no. 3 2014; 'This essay undertakes a detailed discussion of how respecting protocols for representing Indigenous cultures supports the interests of Indigenous communities and producers of stories with Indigenous content. To highlight the importance of Indigenous protocols I review the prominence and reception of Aboriginal stories in Australian film and literature and discuss how protocol guidelines can prevent problematic representations. I demonstrate how protocols influenced writing Calypso Summer (2014), a novel exploring issues relating to my cultural group, the Nukunu, to illustrate the challenges encountered and benefits gained from employing Indigenous representation protocols. ' (Author's introduction)