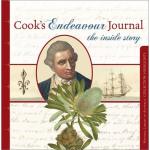 Courtesy of the National Library of Australia
CooksEndeavourJournal_FOmY.jpg
y

Cook's Endeavour Journal : The Inside Story single work   diary
The material on this page is available to AustLit subscribers. If you are a subscriber or are from a subscribing organisation, please log in to gain full access. To explore options for subscribing to this unique teaching, research, and publishing resource for Australian culture and storytelling, please contact us or find out more.

'The second book in the National Library of Australia's beautifully illustrated Collection Highlights series, Cook’s Endeavour Journal: The Inside Story brings to life the record of one of the world’s most famous expeditions, the circumnavigation of the globe by Lieutenant James Cook aboard HMB Endeavour.

'It is a timeless story of courageous exploration — the charting of New Zealand and Australia’s eastern seaboard — and of high adventure: a stand-off with a hostile Brazilian army and a near-shipwreck that almost brought the voyage to a premature end.

'The voyage of the Endeavour helped make sense of the eighteenth-century world. Cook’s Endeavour Journal: The Inside Story, told in Cook’s own words and in historical detail, will help you understand how.' (Publication summary)

VIEW PUBLICATION DETAILS FOR ALL VERSIONS ()

Works about this Work

VIEW ALL WORKS ABOUT (2)
Subjects:
Export this record
Newspapers:
SEE ALL